… in the Democratic primary for the special election to replace Ted Kennedy in the U.S. Senate. Here’s a link to Capuano’s official web site, in case you’re not familiar with him and his positions. He was the mayor of Somerville and we loved him. He’s currently our representative in the U.S. House and I still think he does a great job. He’s got a lot more spunk than Martha Coakley. I’d like to think he’d have beaten Scott Brown, but maybe the outcome of the election would have just been that much more depressing had it been him instead of Coakley. It would have been a much more spirited campaign–I’m sure of that.

On to brighter topics…

Local independent bookstore, Lorem Ipsum, is in danger of going out of business. They’ve found a new home, but need to sell 5,000 $10 certificates, each good for any book priced $20 or less, in the next 10 days. They have an online store, and I’ve already found a few things in their stock that I’ve been looking for. Help them out! http://www.loremipsumbooks.com/fb/

Kim did a post like this, and I’ve been wanting to do one myself. Mine will be sillier than hers because some of the things I love are pretty silly.

Oh my, this is incredibly good Indian food–fresh and delicious, not run of the mill. And so cheap!!! And it’s practically around the corner from our house.
*****************
The Strand Bookstore 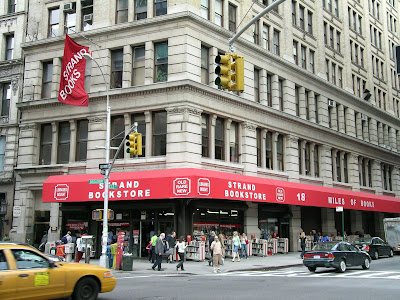 It’s sprawling, it’s packed with books, it’s a Manhattan classic right in Union Square. They’ve kept up with the times–they have an excellent web site on which I’ve discovered a bunch of books–and at the same time they’ve maintained a sort of old school presence in their main store. The last few times I’ve been in New York, I’ve spent hours there–sometimes over multiple visits. The last time I was at the main store, I went to collect some books I’d ordered online. Of course, I had to browse, and ended up adding a few to my pre-ordered stack. They sell new and used, remainders, review copies, and rare books. They have a great art section on the second floor, and there’s a sizable children’s section that I’ve never really properly investigated. Their prices are generally very good. Their book bags are awesome, too. If their onesies came in slightly more appealing patterns, Rainey would already have one.
****************
Arrested Development

Ez and I don’t watch a lot of television, but we do watch a lot of DVDs. Like many people, we missed Arrested Development when it first aired. That was our loss. We just finished watching the whole series on DVD and we love it! Funny stuff. I’m sure we’ll see the film, though I’m a LITTLE worried that it won’t live up to the series.
****************
Casa Silva Sauvignon Gris 2006

We tasted this wine at Dave’s Fresh Pasta and we really like it. It’s got this sort of tangy, almost effervescent quality.
****************
My computer has been unreliable of late–hardware problem, we think–so I’ll end this post here. I’ll have to make this a series as I think of other things I like enough to blog about them.

Ezra recently posted about Honk Fest 2008, and I thought I’d share my photos here, too.  We joined in the parade today, stationing ourselves early along the route and then walking along the route with the parade.  It’s a gorgeous day–perfect for a parade! This one was taken on my Holga (so it’s 120 film). It’s a double exposure, and it’s from my first crack at developing my own 120 film.

I just walked by Soleil Cafe, as I do pretty much any time I walk home from the T. From across the street I saw that the cafe windows are all papered, and I wondered if the place had closed. It seems like they’d been reducing their hours over time and I always wanted to like their food more than I did. Once I got closer, I saw the little signs in all the windows indicating that the cafe is closed but will soon re-open under the management of the fine people who run Modern Pastry in the North End and Medford! Pastries, gelato, sandwiches, and other delights are promised! Yay!!